Murphy Bros. Designers & Remodelers
last week as Minnesota Contractor of the Year for residential interior remodeling under $150,000. The veteran Blaine contractors earned the distinction for a romantic wine cellar they designed and built in Eden Prairie for homeowners John Dockter and Cindy Vavra.

Murphy Bros. beat four challengers for the top (Gold) award. It also won Contractor of the Year honors in the Kitchens over $120,000 category last year for another project in the same home. The five judges awarded the winning 2014 project an average score of 57.8 out of 60 points. Two judges awarded it perfect scores of 60 points. Criteria included meeting clients’ expressed needs, aesthetics, evidence of superior craftsmanship, functional improvements, overcoming obstacles, and innovation. 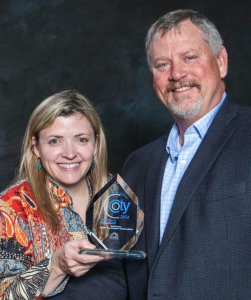 The homeowners were intimately involved in selecting special fixtures and surfaces that reminded them of wine rooms they had experienced in Paris. “Congratulations on winning another award!!!,” they wrote John Murphy following the Awards Gala at the UMN McNamara Alumni Center. “So well deserved. We definitely made the right decision choosing Murphy Bros. for our remodeling.”

The wine room was designed by Murphy Bros. designer Cherie Poissant and managed by Aaron Lenz. It was one of 84 projects Minnesota remodelers entered across 20 categories.

NARI is the only trade association devoted exclusively to the remodeling industry. It has 63,000 members nationwide. The NARI MN chapter is the second largest in the country. Wisconsin boasts the largest.